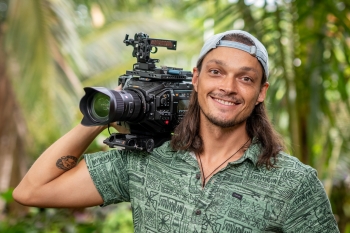 Photographer & Filmmaker based in Suva, Fiji
Tom is an environmental photojournalist, filmmaker, writer and marine biologist. Originally from Germany, he is currently based in Fiji throughout most of the year, where he runs Pacific Media House , a photo and video production... read on

Tom is an environmental photojournalist, filmmaker, writer and marine biologist. Originally from Germany, he is currently based in Fiji throughout most of the year, where he runs Pacific Media House, a photo and video production company.

In 2016 he won the German Science Photographer of the Year Award in the reportage category with a photo essay on his shark research in Fiji. Sharks continue to be one of Tom's biggest passions and have been the subject of numerous assignments over the years.

Tom holds a Master's degree in Tropical Marine Ecology and is a member of the Ocean Artists Society. After completing his degree, Tom found himself at the crossroads between academia and full-time visual storytelling. Realizing the power that visuals had in his own research and the increasing need to build bridges between science and the general public, he decided to pursue a career in telling science and conservation stories through powerful still and moving images.

Since then, he has worked closely with scientists, NGOs, agencies and activists and completed projects in Europe, South America and the South Pacific. His scientific background helped him develop a deep understanding of the natural world while at the same time offering an additional perspective on his assignments.

Tom has won several awards in internationally recognized competitions, and his documentary films have been streamed at festivals worldwide, including three times at the Wildlife Conservation Film Festival in New York. He worked with NGOs and intergovernmental agencies, such as the World Wildlife Fund, the UN, Wildlife Conservation Society, Conservation International, Urgewald, FishAct, the Pacific Community, and others.

Tom's work is largely centred on the marine environment, shark conservation, climate change, and communicating scientific topics in a visually appealing way. Spreading environmental awareness, inspiring conservation efforts and driving positive change with his photographs and films are the underlying goals of all his work.