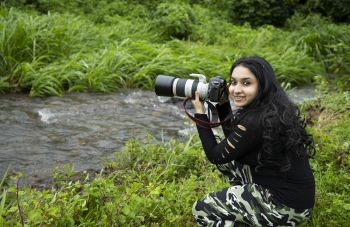 Conservation Photographer/Film-maker based in Mumbai, india
Aishwarya Sridhar is an international award winning conservation photographer, film-maker and presenter from India. She has worked with leading networks like National Geographic WILD, BBC Earth, DD National and Discovery Channel... read on

Her debut documentary has helped protect the last remaining wetlands of Mumbai and she is currently working with the local fishing communities, NGOs and the state towards achieving policy level protection for shallow wetlands in her State. You can find her images published in international and national newspapers and magazines like BBC Wildlife, Guardian, Mongabay, Digital Camera, Times of India, Sanctuary Asia, Saevus to name a few.

In 2020, she became the first Indian woman to win at the 56th Wildlife Photographer of the Year at London. Currently her film ''Tiger Queen of Taru'', is airing worldwide on National Geographic WILD. A Canon EOS Influencer and Decathlon Ambassador, her goal is to create conservation programming for global mainstream television