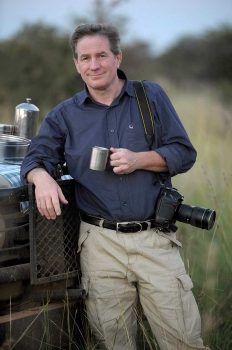 Member
"We have to do something about this," is a phrase often heard while in the company of Joel Sartore. A National Geographic photographer and passionate conservationist, Joel is not only known for his charming sense of humor and midwestern... read on

"We have to do something about this," is a phrase often heard while in the company of Joel Sartore. A National Geographic photographer and passionate conservationist, Joel is not only known for his charming sense of humor and midwestern work ethic, but also for the intense sense of responsibility he feels to preserve all things wild through his photography.

A journalism graduate from the University of Nebraska, Joel started his photographic career at The Wichita Eagle, and by the early nineties he had been recruited by National Geographic. In addition to his delightful work on Americana, his keen interest in raising awareness for conservation has led him to cover issues ranging from land use and endangered species, to wildlife management and the demise of the American prairie. Working both as a freelance and contract photographer, Joel's images have graced over 40 stories in National Geographic Magazine. The hopeful outlook and remarkable wit he brings to his work is contagious, and his ability to find the silver lining in every challenge is an inspiration.

When Joel's wife was diagnosed with breast cancer, he went on a voluntary self-grounding, setting aside National Geographic assignments to care for and reconnect with his three young children. Once his wife was on the mend (she's fully recovered now) he eventually began doing studio portraits of animals at local zoos and rehabs. Joel has now visited more than 300 facilities around the world, and he has now documented over 6,500 species, hundreds of which have run in National Geographic Magazine in dozens of separate stories and articles; The first was on the Endangered Species Act and the second on the amphibian extinction crisis (alerting readers to the fact that 50% of all amphibian species worldwide are at risk).

Joel's work has also appeared in Audubon, Life, Newsweek, Sports Illustrated, Time and numerous book projects including the Day in the Life series. Joel and his work have been the subject of an hour-long PBS documentary entitled At Close Range, as well as many other national broadcasts including National Geographic's Explorer and the CBS Sunday Morning Show. Sartore has been recognized for his work by the National Press Photographers Association, the Inland Daily Press Association, and the Pictures of the Year International contest.

Joel's latest book, published by National Geographic, is the Photo Ark: One Man's Quest to Document the World's Animals.