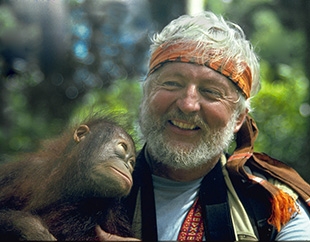 His newest book is entitled Conservation Photography Handbook: The Art of Saving Our Planet One Photograph at a Time 2nd Edition, released in May 2020.

Boyd has served on the Board of Trustees for the Dian Fossey Gorilla Fund, devoted to saving the last mountain gorillas. He is currently a director of Baikal Watch, dedicated to preserving Lake Baikal and other wilderness areas in Siberia.

He has testified before numerous U.S. Senate and House hearings on behalf of wilderness and park preservation legislation.

Boyd has been recognized for his efforts to promote conservation in numerous ways:

He was selected as the recipient of the Sierra Club's 2015 Ansel Adams Award.

Robert Redford presented him an award, on behalf of the Environmental Protection Agency, for his "important, exciting environmental photography and writing."

He was an invited speaker at the 8th World Wilderness Congress in Anchorage, Alaska in October, 2005.

He is a charter member and Fellow of the International League of Conservation Photographers (www.ilcp.com)

He is a founder and Fellow of the North American Nature Photography Association (NANPA) www.nanpa.org and has served on the Board of Directors.

He was featured in an Emmy-nominated television documentary.

He was an invited speaker and panelist at the 9th World Wilderness Congress in Merida, Mexico in November 2009. (www.wild9.org) which drew 2000 delegates from 50 different countries.

He was an invited speaker at the 10th World Wilderness Congress held in Salamanca Spain in 2013.

In their Christmas issue of 2010 Outdoor Photography Magazine (UK) selected Boyd as "One of the 40 most influential nature photographers from around the globe" along with a number of other iLCP Fellows.