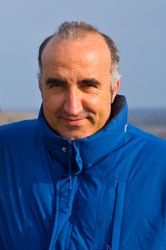 Member
Though a biologist by training, Juan Carlos Muoz took up photography because of his passion for nature since childhood. For him, biodiversity is a rich joy, in which he loses himself every time hes in the wilderness. Its a brimming... read on

Though a biologist by training, Juan Carlos Muoz took up photography because of his passion for nature since childhood. For him, biodiversity is a rich joy, in which he loses himself every time hes in the wilderness. Its a brimming world which he tries to capture in his photographs.

When he decided to study Biology, he allowed himself to be led by his passion for nature. I was simply doing what I had always liked to do. I felt like those tears of fog which I found so attractive and which are incapable of breaking away from the trees and peaks they are attached to.

Commitment accompanied knowledge acquired at university. He didnt have his ownvoice, nor did he have words to express it, but he had his first camera, the tool with which he felt no fear when capturing this wilderness which fascinated him. I could only manage to engage others by showing them my vision. Afterwards, I could be silent.

Many years have gone by since then, and he now feels this passion for nature will be his constant companion in his desire to photograph the natural world. Specializing in environmental stories and wildlife conservation, his work has appeared in National Geographic, Geo, BBC Wildlife Magazine, Terre Sauvage, Le Figaro, Conde Nast Traveler, Stern Magazine, The Sunday Times, Nature&Miljo, Oasis, Lonely Planet, and many other national and international publications. He has published 19 author books about protected areas and wildlife, and he has contributed to numerous coffee table books, travel guides and educational books.

His exploration stories and wildlife subjects are inspired by his aim of searching them ceaselessly across every continent. He has travelled extensively throughout Americas great landscapes, he has gone deep into Africa, he has searched out the wildest corners of the old Europe, he has become impregnated with the rhythms of the Asiatic countries, he has been seduced by the ancient cultures of the Middle East and he has been in places as far flung as the Antarctic, and the Arctic.

As a conservationist and nature photographer committed to broaden his work he is used to collaborate with international and national conservation organizations such as the WWF, WWF Spain, Felix Rodriguez de la Fuente Foundation, Naturaleza y Hombre Foundation. He contributes with his images to national multimedia campaigns held by state bodies and National Parks. He has also contributed to media and TV campaigns.

Some years ago he became a member of the International Environment Photographer Association for contributing to appeal to the world about the importance of the environment because he strongly believes that beautiful, natural landscapes are deeply connected to the spiritual wealth of human beings.