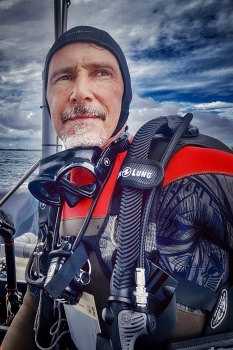 Photographer based in Bonaire
Lorenzo Mittiga, from Italy, is a marine biologist, a conservation photographer, an underwater documentary filmmaker and visual story teller, based in the island of Bonaire, Dutch Caribbean, specialized in following conservation... read on

Lorenzo Mittiga, from Italy, is a marine biologist, a conservation photographer, an underwater documentary filmmaker and visual story teller, based in the island of Bonaire, Dutch Caribbean, specialized in following conservation projects, both underwater and terrestrial. Lorenzo recognizes that photography is a great powerful tool for science and conservation that can be used to raise awareness for nature and respect for it in the viewers.

Lorenzo is widely regarded as one of  the world’s leading underwater photographers. He has been taking photographs underwater since he was 15 years old and has worked as a full-time underwater photographer/videographer since 1996. In the ‘90s and early 2000 he worked as underwater cameraman for movie sets and tv documentaries on the main Italian TV channel, for Discovery Channel, SKY Tv, Universal Pictures, Walt Disney. He dives and  photographs all around the world and his experience count more than 6500 professional dives.

His photographs have been displayed in exhibitions around the world from New York, San Francisco, Miami, Paris, Italy, Mexico, Russia and Dubai.

Lorenzo is a contributor to many publications in the marine, wildlife, diving and photographic media, and to date has published more than 100 articles. In particular, he is a visual story-teller for Ocean Conservation and he is regularly published on international magazines like Wired UK, Wired Japan, New York Times, The Times UK, Scuba Diving Magazine USA, Divers for environment, Green Peace Magazin, Tierwelt, Stern, View, Marie Claire, GQ Korea, Rhythms Monthly, Big Issue Australia, The Telegraph UK and National Geographic. He also contributed to the World UNEP Report 2019 with his images.

Lorenzo is an Ocean Ambassador for Aqualung and contributes for its ocean conservation program and divulgation.

Currently Lorenzo is working on a long-term video production for a short documentary on “Coral larval propagation” method in the coral restoration project with Reef Renewal Foundation Bonaire and he is following it with his photographic project as well. He is also continuing his photographic production in the Mangroves of Bonaire and soon he will follow a Manta conservation project in the Maldives.