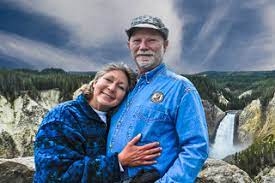 Senior Fellows
Leo Keeler was born in Bisbee, Arizona. He completed his first solo overnight backpacking trip at the age of 9 and began studying wildlife through the live capture of ground squirrels. Dorothy Keeler was raised in San Jose,... read on

Leo Keeler was born in Bisbee, Arizona. He completed his first solo overnight backpacking trip at the age of 9 and began studying wildlife through the live capture of ground squirrels.

They met in 1988, and found their business evolved from sharing similar goals. Their mission: to provide quality, affordable images that inspire, entertain, educate and provide encouragement to conserve and protect our world and its creatures.

Their work has been featured in a national ad campaign that was published in National Geographic, Smithsonian, Newsweek, Life, Sports Illustrated, Field and Stream, TV Guide, People and Alaska Magazine, as well as the Wall Street Journal, The New York Times and The Washington Post.

They have served as wildlife consultants for several filmmakers in Denali National Park and have been featured in "Men's Journal," produced for ESPN's "Living Dangerously," for the BBC, and for the Travel Channel's "Alaska - Walk on the Wild Side."

The Keelers were leaders of the private, non-profit group Friends of McNeil River for 10 years, dedicated to protecting the world famous McNeil River brown bears. They were instrumental in establishing the 119,000-acre McNeil River Refuge. In 1995 the Keelers were featured on CBS News' "Eye on America" with John Blackstone twice when they led a drive to thwart a bear hunt in the refuge by encouraging people to apply for a permit and stay home if their names were drawn. It worked. Six of the eight permits were awarded to people who had applied for a hunting permit to save a bear's life. The Keelers later led the effort that closed the refuge to brown bear hunting.

The Keelers assisted Defenders of Wildlife, The Alaska Wildlife Alliance, and Friends of Animals in protecting the famed Toklat wolf pack in Denali National Park. The Toklat wolves are one of the most famous, most viewed, most photographed, and the first and longest studied group of wild wolves in the world.On November 2, 1999, CBS Evening News with John Blackstone featured the Keelers and the Toklat wolves in a special segment of "Eye on America."

Dorothy Keeler's successful account of creating a petition to protect the Toklat wolves of Denali National Park is the lead story inMoveOn.org's book entitled, "MOVEON'S 50 WAYS TO LOVE YOUR COUNTRY: How to Find Your Political Voice and Be a Catalyst for Change."

On February 3, 2000, the Keelers received the Ginny Hill Wood Award from The Alaska Wilderness Recreation & Tourism Association for their photographic contributions to the wildlife conservation efforts in Alaska.

In October, 2005, the Keelers were given the honor of being selected as two of the 40 founding members of the International League of Conservation Photographers (ILCP).

In February, 2007, the Keelers, in partnership with the Alaska Wildlife Alliance, created a video and posted it on YouTube.com to protect the McNeil River bears yet again.The Alaska Board of Game had voted to allow hunting on an adjacent piece of land that had been closed to bear hunting for over 20 years, and nothing short of an avalanche of protest was needed at the March Board of Game meeting. The video was successful in generating over 600 individual, handwritten letters of support for the bears, and the Board voted to overturn its prior vote to allow the hunt, thus saving the bears.

On January 11, 2008, Dorothy Keeler completed a video entitled "End Aerial Wolf Hunting" and uploaded it to Current.com, the brainchild of Al Gore. Within a week, the video became the #1 Most Popular Viewer Created video on the web site, and one of the top 10 videos on the entire web site. Five years in the making, this video exposes the truth about the stranglehold the hunting lobby has on wildlife management in Alaska.

The Keelers' images were included in the 40 image photography exhibit "Irreplaceable: Wildlife in a Warming World," which toured the United States and was sponsored by iLCP, Earthjustice, Conservation International, and the Noah Alliance.