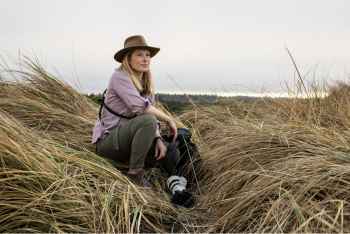 Photographer/Filmmaker @ Neon Raven Story Labs based in Astoria, OR
MA - Environmental Journalism, BS - Zoology Morgan (Mo) Heim is a wildlife photojournalist, filmmaker and adventurer focused on the ways human-influenced environmental change impact wildlife. Her goal is to find the beauty, humor and... read on

Morgan (Mo) Heim is a wildlife photojournalist, filmmaker and adventurer focused on the ways human-influenced environmental change impact wildlife. Her goal is to find the beauty, humor and perseverance in the struggle to make the world a better place.

She began her career studying fisheries, listening to whales and working on dam removal projects. Now she uses her background in ecology and journalism to tackle subjects such as roadkill, living with cormorants, deer migration and the environmental impacts of drug cartels on forestlands. She is the founder of Neon Raven Story Labs, a storytelling and strategy platform for conservation, and in 2020 co-launched Her Wild Vision Initiative aimed at raising the voices of diverse women in the craft of conservation visual storytelling. Morgan is a Senior Fellow with the International League of Conservation Photographers and National Geographic grantee. Her work has appeared in National Geographic, Audubon, Smithsonian, Nature Conservancy Magazine, The New York Times, Newsweek and many others. Her films have appeared and toured with Wild & Scenic, Telluride and Banff Mountain Film Festivals, and you will perhaps catch a glimpse of her favorite deer, "Deer 139" on your local PBS station, as it was picked up for distribution by NETA. She has been honored in Wildlife Photographer of the Year and the Big Picture Natural World Photo competitions.

Mo, her husband and dog are based in the small coastal town of Astoria, Oregon, where the waves are big, the mountains close, and the weather not nearly as bad as everyone thinks it is.